SimpleForest is an open source plugin for the Computree platform. Both the plugin as well as the platform are written in C++. The plugin itself is licensed under the Gnu General Public License and utilizes the following libraries: PCL, OpenCV, Eigen, FLANN, Boost, QT and GSL.

SimpleForest produces so called quantitative structure models (QSMs) from point clouds. A QSM is a tree model build with topological ordered cylinders. It allows output generation in form of csv files, which can further be processed with interactive tree modelling software such as Amap studio or analyzed statistically in R. Additionally ply files can be generated and loaded into meshing software like CloudCompare, MeshLab or Blender.

Before you download the software you might want to get a quick impression of the result quality. 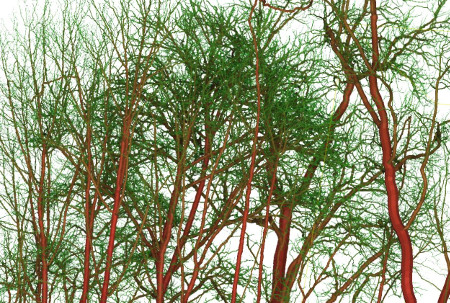 The world's forests bind a significant amount of carbon. While the majority of earth's carbon is bound under the surface of the earth, this carbon is not in contact with the atmosphere. We can ignore this carbon in the sense of climate change. The green house effect caused by Co2 is modelled by the carbon which is already within our atmosphere or in contact with our atmosphere - the so called carbon cycle. Forests are a major sink of circulating carbon, but forest degradation yet leads to a carbon increase.

From IPCC - Mitigation of Climate Change:

Spreading of forest fires can be simulated and adaptations can be made.

From IPCC Summary for Policymakers:

While deforestation is dangerous as bounded carbon will enter the atmosphere, forests can also be used for renewable energy if planned responsible.

Detailed computer models can help in the prediction of forest inventory. They can give an answer to how much carbon is bound right now.